Not just anyone can play the first sidekick of Batman and receive a positive response from DC fans. This does not seem to be a problem for Australian actor Brenton Thwaites though, as the star of the Warner Bros. series Titans has been able to captivate comic book lovers and DCU fans since the show’s premiere in October of 2018.

Thwaites’ iteration of the iconic Boy Wonder takes place just after Dick Grayson leaves Batman/Bruce Wayne behind. Where the show picks up, Dick Grayson is a police detective based in the city of Detroit, still spending his nights fighting crime as Robin, but a fraction of the person he once was.

While Thwaites’ Dick Grayson starts off as Robin, he becomes forced to find out who he truly is through a road of triumphant ups and painful downs. Eventually, he destroys his Robin costume, henceforth destroying that part of him, and takes on the role of mentor to the young Titans he meets along his journey as Nightwing.

Dick spends most of season 2 without an identity. He eventually rectifies this problem at the end of season two, as we finally see the transformation of Thwaites’ Dick Grayson into Nightwing.

WMBD’s Matt Sheehan exclusively interviewed Thwaites about his role as Dick Grayson. The Australian actor gives fans a closer look at the man behind the mask.

“There’s a lot of technicality to most scenes that really don’t let me sit back and wonder,” Thwaites said.

While putting on the suit is an exciting process, he said after shooting a scene, the end result is a complete transformation.

“When I see it on screen, I’m transformed into the world. When I’m doing it, I feel the responsibility of putting myself in the scene and telling the story. Which is quite difficult because we’re creating a whole new world,” Thwaites said. “An Interview with God, I Met a Girl to some extent, was set in a real place to some extent.”

“Gotham’s not a real city, at least that I know of,” Thwaites laughed. “The responsibility to believe you’re in that city and to tell that story in a realistic way is quite challenging. So while I’m on set I’m trying to focus on believing where I am and what I’m doing. But when I saw Nightwing on screen at the end of season 2, I’m totally in the story. I’m captured by how cool it looks and I love the two sticks as his martial art form.”

So far in ‘Titans’, just a small part of the show is set in Gotham.

“There’s no Gotham, but here’s a fun fact, there is a Metropolis. It’s here in Illinois,” Sheehan laughed.
“Season four! Season four! We’ll come down and shoot there, mate. What do you say?” Thwaites joked.

Prior to playing the role of Dick Grayson, Thwaites said DC sent him a large stack of comic books for him to read.

“Taller than myself,” Thwaites laughed. “‘Titans’ was based off a teenage cartoon, and the way it was adapted and developed was unique in itself. It was a new take on this story.”

Thwaites said in episode one of season 1, titled ‘Titans’, Dick Grayson was in a “purgatory” trying to figure out who he was.

“I’m not super well-versed in the comic book world, but what was very important was just to understand the arc of the story and how best to tell it. In terms of character, there was a moral compass of Dick Grayson that I had to protect and hold onto. Because he is a superhero that will do good if he can do good. He’s a good guy, he’s moral, he doesn’t kill, he will make the right choice, he wants to save everyone,” Thwaites said. “For us to cross that line is either a specific story point we use sometimes, or is completely wrong and it goes against the canon.”

He said Grayson’s moral compass is his favorite part of playing the part. “He cares about everyone, even the bad guys. He cares about things like not lying, not betraying a friend, saving the city, and creating a better world. But the little character things that I’ve attached to are loyalty, friendship, respect, and attempting to be a good mentor even if he fails at that,” Thwaites said.

“There was some energy and some darkness to season one that I liked. The first 3-4 episodes I felt was really committed to a high-stakes maturity that we let go in season two and the end of season one. Rachel had just seen her mother shot dead, she was on the road, people were trying to abduct her. She was facing all these trustful people on the road then they betray her, until then she meets me. I basically become her guardian and her safe haven. From there the story develops.”

Thwaites said the villains in season one were incredible.

“They were weird, unique, they couldn’t be defeated. They had this Deathstroke-Esque quality on them. Which presented a real threat. I have a special spot in my heart for season one. It kicked off with a strong start, of course there were problems up the wazoo,” Thwaites said. “Season two we had that family vibe. A little less dangerous, less crazy, but then you add the Deathstroke element in it. He’s been our best villain. Season one we had great villains, but Deathstroke is a Supervillain.”

Thwaites said his favorite fight scene is that which takes place between Deathstroke and Robin in the eighth episode of season 2, titled ‘Jericho’.

“The best fight scenes are the best stories. We have fight scenes where we’re just fighting, and we have fight scenes that really enhance and support the story. That church scene is a climactic moment. We’ve built all this tension between Deathstroke and Dick Grayson. We’ve established this traditional villain/hero relationship. When I saw the scene, I thought it was perfect.”

This rounds off part one of two articles covering Sheehan’s exclusive talk with Brenton Thwaites. 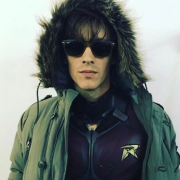 ‘The Umbrella Academy’ Renewed for Season 4 at Netflix